Judge Kevin Burke Takes on Record Clearance from the Bench

In Minnesota District Court Judge Kevin Burke’s mind, “a society that wants to grow needs to realize that people will make mistakes, and that many of those people deserve a second chance.” (Photo courtesy of Judge Kevin Burke.) 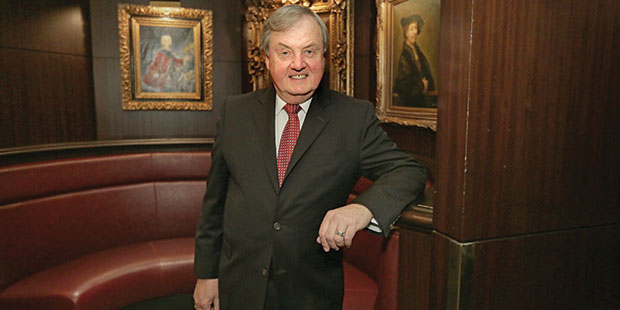 "Decent people can end up in a situation in which the consequences of having a public record of your misdeed vastly outweighs its importance to anybody."

Kevin Burke is a District Court Judge in Hennepin County, Minnesota. There, he was elected to four terms as Chief Judge and three terms as Assistant Chief Judge. From 1991-1996, he served as the Chair of the Conference of Chief Justices. Judge Burke teaches trial practice at the University of Minnesota Law School and criminal procedure at the University of St. Thomas Law School.

In Minnesota District Court Judge Kevin Burke’s mind, “a society that wants to grow needs to realize that people will make mistakes, and that many of those people deserve a second chance.”

The state-level judicial system plays a role in making that society a reality, said Judge Burke, especially when it comes to clearing criminal records and allowing people to put their past behind them.

Judge Burke started his judiciary career as a district court judge in 1984. Since then, he has heard thousands of cases and, in 1995, started Minnesota’s first drug court, citing the need for greater fairness in the criminal justice system. With the drug court, he reduced the time it took for cases to be heard, a move that ensured people—and their cases—didn’t get lost in the system, which promoted efficiency and got more people access to the resources they needed. Judge Burke grew the innovative court model to become one of the largest drug courts in the United States, and his work has subsequently led him to 40 states and 8 countries to speak about improving criminal justice systems.

As a judge involved in criminal justice reform, the impact criminal records can have on a person has never been far from Judge Burke’s mind. Over his 34 years of public service, he has seen many people struggle because of the legal and regulatory sanctions and restrictions associated with their criminal record, also known as collateral consequences.

“With the internet, with computers, with the background checks that occur all over the place, we’re in an era in which there really is no forgiveness,” Judge Burke said. “And it can inhibit somebody’s ability to be successful and a contributing member of society.”

Judge Burke recalls a case of a woman who approached his court looking to expunge her criminal record. She had been working at a bank for more than 15 years and had recently received a promotion, which required a routine background check. The check uncovered a criminal record that stemmed from a fight she and a partner had while in college, which ended in them both being arrested.

Rather than an extended legal proceeding, she decided to plead guilty and put the incident behind her. After going on to receive a master’s degree, she had a successful career at the bank—until the background check. Her employer not only revoked the promotion, but threatened to let her go unless she removed the decades-old conviction from her record. Judge Burke ultimately granted her the expungement, but the story stuck with him.

“Decent people can end up in a situation in which the consequences of having a public record of your misdeed vastly outweighs its importance to anybody,” he said. “A lot of people who do a great job aren’t allowed to do it.”

Criminal records don’t just affect a person’s employment outcomes, but often beget barriers to housing and education as well, which can lead to decreased financial opportunities.

These barriers are especially felt in communities of color where Judge Burke describes criminalization as “a big problem.” Black men are six times more likely to be incarcerated than their white counterparts. This incarceration disparity often leads to widespread and lasting effects of collateral consequences that affect some communities more than others.

Referencing the 50th anniversary of the Kerner Commission Report—a 1968 report on race relations in America that found less social and economic opportunities for black people than for white— Judge Burke believes that its findings are still relevant today.

“There’s a recent report that went to look at, well, where are we 50 years after the Kerner Commission? And the answer is, in some areas we’re significantly worse,” he said.

In regard to record clearance as a whole, Judge Burke acknowledges that work is already being done by state lawmakers in his home state of Minnesota around record clearance and collateral consequences. However, he says that more work remains to be done. This includes rethinking the pardon system in states like Minnesota, where Judge Burke believes many more people have the potential to benefit from pardon review than do so currently.

“There are thousands of people with small criminal records,” Judge Burke said “…those little cases have enormous collateral consequences to people.”

Another opportunity is improved follow-up on cases in the judicial system. During his time on the bench Judge Burke has noticed that when record clearance petitioners appear before judges in his county, it is often the first and last time the judge will see them. Judge Burke believes that more can be done to keep track of the success stories that come from people with expunged records, which would show policymakers and the judiciary the importance of expanded record clearance and the need for further dialogue.

Drawing from decades of firsthand experience, Judge Burke said he always reminds his students at the University of Minnesota that “all of us are capable of making some pretty serious mistakes in our lives, and most of us . . . were lucky enough not to get caught.”

For those who did, however, he emphasized that the judicial system could play a larger role in minimizing the potentially outsized damage these mistakes and the criminal records attached to them can have on people.

But for now, he looked to the future. Recognizing that many people, not just judges, need to play a role, Judge Burke emphasized that record clearance is “a big, nationwide problem that requires a nationwide commitment to [give people] a second chance.”