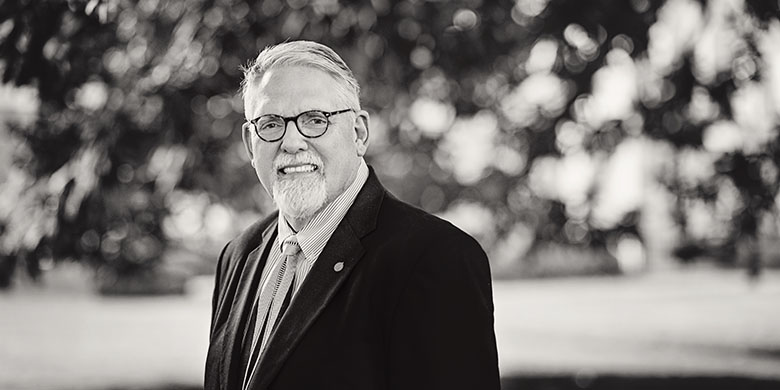 "I continued to see people coming back [to prison] and I thought we had to do something better."

Arthur “Art” Beeler is a clinical assistant professor at North Carolina Central University. He has worked in corrections since 1975, most recently as a complex warden at the Federal Correctional Complex in Butner, North Carolina (FCC Butner), until his retirement in 2009. Beeler has been published in scholarly journals on criminal justice topics and regularly speaks on the subject. He has won several awards for his work, including the U.S. Surgeon General’s Medallion.

In the 1980s, a man named Bob was convicted of possession with intent to distribute and served five years in a North Carolina prison as a result. When Bob was released from prison, he began to turn his life around: He got married, attained a barber’s license, and went on to work for nearly 20 years as a barber.

One day, Bob decided that he wanted to open his own barber shop. He went to a government loan agency to seek funds to start the new business, but the loan was denied. Art Beeler thinks Bob was denied the loan because of his criminal record—and he doesn’t think that’s how the system should work.

Beeler worked in corrections for more than 30 years, beginning his career as a volunteer probation officer and ending up as complex warden at FCC Butner. In that time, Beeler saw his fair share of reentry stories, but Bob’s stuck with him. Beeler confesses that this story, more than anything else, got him involved in working to reduce the burdens of collateral consequences on people who have criminal records and are trying to rebuild their lives.

“[Bob] was doing day to day work, taking care of his family, and raising his kids . . . a good, solid man,” Beeler said. “This was a young man who was trying to make the American dream happen and had worked diligently for 20 years to make it happen. And he was denied that because he had a felony conviction.”

Beeler admits that he did not know much about collateral consequences early in his career. However, stories like Bob’s quickly showed him the adverse impact a person’s criminal record could have on their future success, including employment opportunities, which is a critical part of reentry.

“I continued to see people coming back [to prison] and I thought we had to do something better,” he said.

While some collateral consequences are necessary, Beeler says, “many of them do not have a nexus to public safety” and only create obstacles for those trying to rebuild their lives after leaving jail or prison. These policies, he said, should be reviewed by policymakers and stakeholders.

In addition to that kind of legislative action, Beeler also points to record clearance as a useful tool for people with first-time offenses and misdemeanors seeking employment, particularly young people.

“Being able to say no, I’ve never been convicted of a misdemeanor, would make a huge difference for a lot of folks,” he said.

Beeler also notes, however, that “institutional memories are long.” In small communities throughout the country, record clearance may be less effective because members of the community often know who has had a criminal record, even if it’s been cleared. As a result, these people may continue to face employment difficulties because of their criminal history regardless of “if it’s on a piece of paper or not.” That’s why he says working directly with people to help them overcome the collateral consequences they face is necessary, too. As a corrections administrator, Beeler wanted to contribute—so he took things into his own hands.

He started working with the late Duke Law School Professor Judge Robinson Everett, conducting seminars that taught people incarcerated at FCC Butner skills and information they would need when reentering the community . As the complex warden at FCC Butner, Beeler became a champion of public-private partnerships that benefitted both people who were incarcerated and local employers. Most notably, he worked with the Meineke Car Care Center corporation to provide mechanic training to qualified men in prison. Successful completion of the training led to employment at Meineke upon release.

The Meineke program was small but effective, according to Beeler, and provided employment for men returning home with criminal records. The results were long-lasting: several of the men that came through that program became managers with Meineke.

Beeler admits that partnerships such as the one he helped create with Meineke require extensive collaboration and the willingness of private sector leaders to hire people who have criminal records. However, the low national unemployment rate and high demand for workers make the present time ripe for similar partnerships that could benefit employers and increase the number of job opportunities for people who have criminal records.

For Beeler, it all starts with education. Educating people who are incarcerated about collateral consequences is critical in preparing them for reentry and employment. Providing people with information on how specific collateral consequences can affect their employment opportunities is key for them to assess which type of skills training they should devote time to while incarcerated—for instance, not training for a job that requires an occupational license for which people with a record are ineligible.

It isn’t just people returning from incarceration that don’t understand the impact of collateral consequences. Since retiring from FCC Butner, Beeler has taught at several universities, including Duke. A few years ago he walked into a seminar where only two of the 24 third-year law students he was teaching could correctly define what collateral consequences were. As an educator and former corrections administrator, Beeler often emphasizes the importance of future defense attorneys and prosecutors understanding what collateral consequences are and how they affect people’s lives. He believes this knowledge allows his students to think more critically about the role they will play in the justice system.