Naomi Maisel (pictured center) has helped grow First Step’s outreach and specialized the agency’s service partnerships based on the data and information collected about the needs of clients through analysis and community outreach. 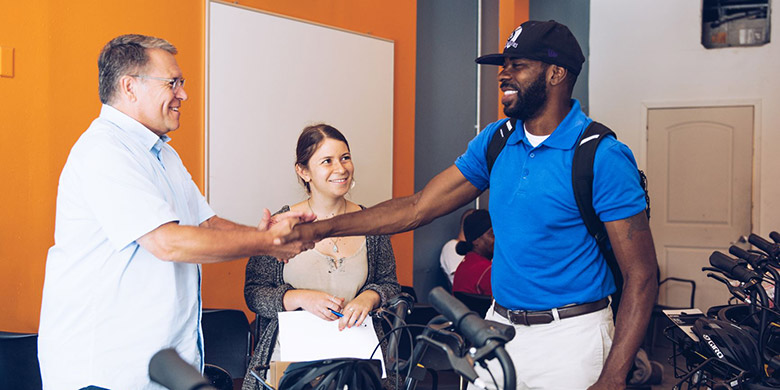 "What’s great about this model is that it gives the employer the peace of mind that we’re taking on the risk."

Naomi Maisel is the director of operations-community outreach for First Step Staffing in Atlanta, Georgia. She graduated from Emory University.

More often than not, the hardest part about getting a job for people who have criminal records is getting their foot in the door. Being given the opportunity to show they can work is the first step to building a more stable life, and First Step Staffing is using data to make it happen.

Aptly named, First Step Staffing was founded in Atlanta in 2007 as a nonprofit staffing agency with the mission to secure stable employment and income for people transitioning from homelessness, many of whom also have criminal records. When First Step first began, the small nonprofit helped connect 100 people each day to employment. Today, the staffing organization has grown in both scope and impact, helping to employ nearly 1,000 people every day in Atlanta, Philadelphia, and Nashville. Such a high volume of service requires and produces a great amount of data; that data is handled by Maisel.

Maisel started at First Step as an intern, hired to help the organization develop its metrics and key performance indicators. She went on to build the organization’s data system and was offered a full-time job as a project manager and subsequently promoted to operations director. She has since helped grow First Step’s outreach and specialized the agency’s service partnerships based on the data and information collected about the needs of clients through analysis and community outreach.

“There was no program for [metrics], so I did that, and it got really exciting,” she said. “I didn’t know I would be passionate about it, but I was.”

Like other staffing agencies, First Step acts as the intermediary between employers and job seekers; the agency interviews, conducts a background check on, and hires the applicant, who then goes on to work for one of the businesses with whom the agency contracts. First Step is the legal employer and pays the employees’ salaries, while the business it services provide the positions and pay First Step a fee. People who are experiencing homelessness or have criminal records and other barriers to employment can complete the entire job application process with First Step. This model, according to Maisel, takes some of the perceived risk associated with hiring people with criminal records from businesses because First Step is the “employer of record” and is responsible for the workers’ compensation and liability insurance. In hundreds of cases, these employees are then hired full-time by the businesses once they have established a good work ethic and demonstrate success in the work environment.

“What’s great about this model is that it gives the employer the peace of mind that we’re taking on the risk,” she said. “It enables us to give work to people who wouldn’t normally be able to get that position.”

The agency fills “light industrial” positions, which can range from warehouse distribution to food processing and packaging. Through many partnerships with a large number of local businesses, First Step is often able to provide positions to people whose criminal records may prevent them from working in certain industries, increasing their chance of placement and success.

“If a client has a bunch of DUIs, we can’t put them in our driving (jobs) but we can put them somewhere else,” she said. “With folks with different criminal backgrounds, we have so many customers—about 100-plus employers in Atlanta right now—that usually there’s something for everyone.”

The model has proven effective, with nearly two-thirds of clients making it to the six-month mark at their respective jobs. For those who don’t make it to that six-month mark, Maisel points to recidivism and communication gaps, as well as general “volatility” in their lives, as some of the many reasons clients stop working. She admits that more can be done, which is why First Step recently rolled out its “Response Interventions” study.

This six-month study used data to identify all new clients who worked 10 hours or fewer during their first month of employment. First Step staff reached out to these clients to figure out whether they need additional resources, such as housing and transportation, to succeed in their new roles. This pilot was possible through Maisel’s data collection and First Step’s many partnerships with other reentry organizations in the area; it also provided important insight on the bigger picture of the barriers to employment that this population faces and allows First Step to build more intentional support systems to lessen these barriers.

“Number one, we’re intervening before it gets bad and before they lose their job,” Maisel said. “Number two, we’re getting really good data on why people are falling off. Is it because of transportation? Is it because of childcare? We don’t know until we get the data.”

Another place Maisel hopes to see data and automation play a larger role in is record clearance. Drawing from her own experience running background checks on job seekers, Maisel said even the act of attempting to go through long documents to find expungeable records can be a potential barrier.

“It is very confusing and can be intimidating for clients to go down that path,” she said. “And when your life is so volatile, you don’t have time to go back and forth with a lawyer to try and fix it.”

Maisel thinks an automated record clearing system will help ease some of those burdens for people and, consequently, facilitate increased access to employment. While she has heard dialogue about record clearance among civic leaders, she hopes to see the conversation expand to include more policymakers. In the meantime, Maisel plans to continue growing First Step’s footprint in Atlanta, as well as in other cities across the country, because she has seen firsthand how life-changing employment can be.

There may be few better examples of that notion than Peter.[i] Peter came to First Step shortly after he was released from prison and had been turned down by other staffing agencies for employment because of his criminal record. First Step helped Peter, guiding him through the application process and ultimately securing him employment at Sun Trust Park, home of the Atlanta Braves baseball team. Peter excelled. He was eventually brought on as a full-time employee with benefits, and was honored as “Employee of the Month” at the park.

Though not all clients end up like Peter, the impact First Step, its community resources, and its targeted data have on the people it works to employ is clear. Maisel recounts how First Step played a role even at the ceremony where Peter received his Employee of the Month award

“[Peter] doesn’t have any family, and one of the things that spoke to me a lot about his story was that a couple of First Step members went to the ceremony to be his ‘family,’” she said. “He completely flipped his life around.”

[i] The person’s name has been changed to protect their privacy.